Farm Concern International (FCI) encourages women involved in production and marketing of agricultural value chains to take lead in producer groupsâ€™ leadership positions so as to improve their economic, social and economic status. 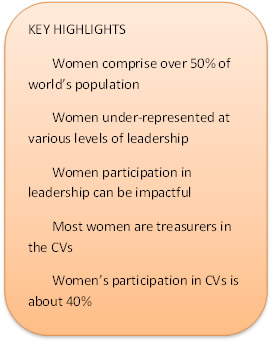 Women make up a little over half the worldâ€™s population, but their contribution to measured economic activity, growth, and well-being is far below its potential, with serious macroeconomic consequences. Despite significant progress in recent decades, labor markets across the world remain divided along gender lines, and progress toward gender equality seems to have stalled. Female labor force participation (FLFP) has remained lower than male participation, women account for most unpaid work, and when women are employed in paid work, they are overrepresented in the informal sector and among the poor. They also face significant wage differentials vis-Ã -vis their male colleagues. In many countries, distortions and discrimination in the labor market restrict womenâ€™s options for paid work, and female representation in senior positions and entrepreneurship remains low (Elborgh-Woytek K., et al., September 2013).

However, a UN Annual Women Report (2013 â€“ 2014) indicated that female representation in Africa has seen the fastest growth in any region of the world. But gender disparity in political participation in the continent is also the most severe. The participation of women in local government can have a particular influence on local and national development, global affairs and/or social issues that affect their familiesâ€™ daily lives such as healthcare, education and infrastructure.Â

Factors that limit or facilitate womenâ€™s participation in political processes â€“ as voters, activists, leaders and decision-makers vary according to social or cultural circumstances, economic situations, geography, and political context and system. The factors commonly identified as barriers to womenâ€™s participation include gender stereotypes and outright discrimination, personal obstacles such as lack of confidence, culturally prescribed roles, low voter education, womenâ€™s relative lack of financial and socio-economic capital, and political institutions that are unconducive. Â

However, the Commercial Village Model developed by FCI to enhance implementation of the DoHoMa project tries to increase women participation in leadership and other development activities in Tanzania. The Model promotes a two-tier leadership structure to ensure all members participate in supporting their commercialization efforts. One level is executive positions and the other is the sub-committees where members largely participate.Â

An analysis of leadership reveals the extent to which different genders and age groups are involved in decision making in CVs. The results showed that women were highly involved in CV leadership. While more men held the overall leadership positions of chairpersons in Siha, Meru, the chair positions were taken up by slightly more men. In both sites, more women served as treasurers, a position that is significant in terms of managing financial affairs of CVs.

The increased participation of women in executive leadership positions is as a result of deliberate efforts of the DoHoMa project to promote womenâ€™s role in decision making in the CVs. Basically, the project promoted this core issue in every CV to at least 40% female participation. Promoting such inclusive leadership is to ensure that women equally benefit from commercialization efforts in CVs and expand their knowledge and participation in local, national and international development. This, coupled with other political and socio-economic needs is what Africa need for it to turn into a developed continent and thus be entirely independent. Â