The road that leads to Makandi in Tigania West, Meru, is dusty and bumpy.On both sides of the road, one can see pigeon peas, maize, beans and dolichos beans sticking out of the red alluvial soil.It is apparent that the crops have done well this season. The bumper harvest is evident at Makandi Trading Centre, a few kilometres away, where farmers in the region own a grain store. Lucy Kaari, a farmer and a Village Knowledge Worker (VKW), attributes the improved harvest to a mobile phone software farmers have been using. Dubbed Community Knowledge Worker Search, this smartphone application allows a VKW, who is an extension officer, to access substantial information on crop husbandry... Read More

Roselyn Ayiemba picks her nutrition guide book from her handbag as she welcomes visitors to her business stand in a village trade fair in Ebutsalwa, Vihiga County. “Welcome and feel free to taste all these cakes and crisps made from pumpkin, banana, cassava, amaranth and soya beans,” she tells visitors from the ministry of Agriculture. Ms Ayiemba, a member of Matunda development group says high demand for nutritious foods and ready market has motivated the team formed two years ago to make the products daily and supply them to markets in Vihiga, Kisumu, Busia and Kakamega counties...Read More 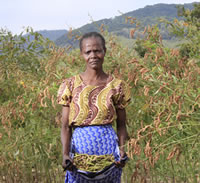 When a friend advised me to ditch maize for dolichos beans (njahi) in 2010, I was confident that that would be the best thing for me.From the way she put it, I was to plant, weed and wait for a bumper harvest.It made great sense to me then. Around that time, I desperately needed to raise money for my children’s school fees. They were in secondary schools. Three of them. Again, my maize was not doing very well. I had grown it on my 1.5 acre farm, harvested about 10 bags, but the price was Sh1,500 a bag, which was very low. I, therefore, did not hesitate to plant dolichos, after getting the seeds from a market in Tigania-East, where I farm. ...Read More

SPORTS are not just for recreation and entertainment and FARM Concern International (FCI) has started using soccer matches to promote a sense of farming and agricultural undertakings among youth in Arusha and Kilimanjaro regions. FCI decided to take the initiative following the realization that most farmers in Tanzania happen to be elderly people and as far as Arusha and Kilimanjaro precincts are concerned, agriculture is a sector dominated by older women, while the youth are totally unconcerned, choosing, instead, to migrate into urban areas, seeking white-collar jobs... Read More

In Busia County, western Kenya, around 10,000 farmers have increased their cultivation of cassava in order to supply industrial markets. The introduction of chipping machines has made a big impact, allowing for much quicker processing of raw cassava, which is chipped and dried ready for sale within just a few days. By working in producer groups, farmers produce sufficient quantities to attract larger buyers, including animal feed manufacturers and flour millers. Pius Sawa visits Tangakona Commercial Village to see the cassava chipping process in action and to find out how the technology has transformed the lives of the farming community...Read More

There was a time not too long ago when life seemed uncertain for Rose Ekisa, 33. The young widow and mother of two was staring destitution in face as she struggled to make ends meet. Although she farmed her late husband’s land, there was little to show for all the hard work she put in... Read More