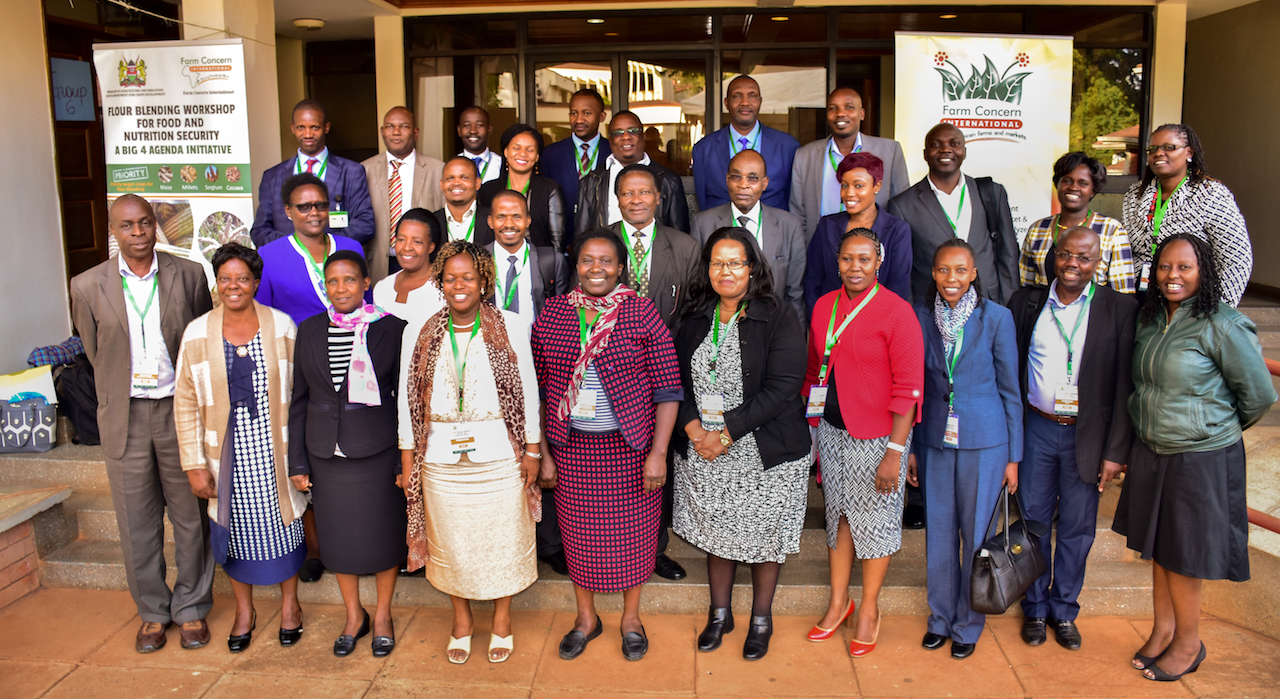 Blending of Flours for Enhanced Food and Nutrition Security Workshop

The Ministry of Agriculture and Irrigation, State Department for Crops Development in conjunction with Farm Concern International, FCI organized a Consultative Stakeholder Workshop on Blending of Flours for Enhanced Food and Nutrition Security.

The consultative workshop was held on Wednesday, March 28th 2018 at Kenya Agricultural and Livestock Research Organization (KALRO) headquarters in Loresho from 9am- 5pm. The chief guest was the Principal Secretary Agriculture, Dr. Richard Lesiyampe who was represented by Mr. Philip Markheti with participants drawn from the government, development organizations, private companies, farmer organizations and processors.

The workshop sought to come up with strategies to reduce pressure on maize consumption trends and food dietary practices by encouraging blending of maize flour with the largely underutilized rich flours such as millet, sorghum and cassava. This is one of the interventions to increase food security in the “Big 4 Plan” of the Government of the Republic of Kenya.

The country has experienced over reliance of maize flour as the main staple food in most diets for majority of Kenyans. Maize, both in terms of subsistence and market-purchased crops, is the most important staple food-crop relied upon by about 96% of Kenyans and contributes significantly to food security and income in the Country. It dominates food consumption, accounting for 9-18% of total household expenditures across the country. This has increased the demand for maize despite the downward spiral in its production. According to the Kenya Economic Survey 2017, maize production declined from 42.5 million bags in 2015 to 37.1 million bags in 2016 reflecting a 13 percent drop. This has pushed Kenya to rely on imports under the subsidized imports programme to meet its annual maize requirements of nearly 62 million bags. The number of Kenyans staring at starvation is projected to increase in the coming years as the population increases at 3.3% while maize production increases by 2.4% over the same period of years This situation informed the convening of the blending of flours consultative workshop to assess the challenges and opportunities in milling maize flour blends and come up with interventions to reduce overdependence on maize flour by reversing the maize consumption trends and food dietary practices in Kenya.

Speaking during the workshop, Mr. Markheti, Deputy Director, Agriculture who represented the Principal Secretary challenged stakeholders to critically focus on radical action to promote blending of maize flour with largely underutilized nutrient-rich millet, sorghums and cassava flours and propose interventions to inform future programming in production and commercialization of the blends, promotion of heathy nutritious flours, the role of private sector for business development service, and quality & standards for maize flour blends. This will have tremendous positive impact on ensuring food sufficiency and enhanced nutrition status of our people.

The Principal Secretary emphasized that food and nutrition security is an important pillar in the realization of the Big Four Plan of the Government of the Republic of Kenya. The Permanent Secretary noted that consumption of sorghums and millets has been low in Kenya due to eating habits and taste preferences that don’t promote their consumption. He appreciated that the engagements of the workshop would create a platform for experience sharing and also on investment opportunities for maize flour blending for improving nutrition and food security outcome. “I would like to assure you that the Ministry will continue to support any effort towards ensuring food sufficiency and enhanced nutrition status,” said DR. Richard L. Lesiyampe, CBS, The Principal Secretary, State Department for Crops Development.

In her introductory remarks, Dr. Grace Chirchir, Deputy Director Agriculture - Agribusiness Development, State Department for Crops Development, highlighted that it is the policy of the Government that all Kenyans, throughout their life cycle to enjoy at all times safe food and water in sufficient quantity and quality to satisfy their nutritional needs for optimal health.

Mumbi Kimathi- Strategy and Sustainability Director at Farm Concern International observed that Cost Benefit Analysis (CBA) is essential for farm budgeting and planning enabling farmers to effectively compare and determine the profitability of various commodities; thereby creating an opportunity to identify and venture into farming as an enterprise based on current data. “This workshop will help to ensure all efforts by the various players are consolidated and implemented to ensure consumers appreciate and understand that flour blending is for their benefit resulting in their full support to the initiative,” Mumbi Kimathi.

The workshop suggested inclusion of additional scope to include wheat flour blends to reduce pressure on wheat and also include amaranth and soya as part of the blending crops for nutritional benefits. It was also agreed that the stakeholder working groups will develop the maize and wheat flour blending 10-year strategy by May 2018 supervised by the State Department for Crops Development, Kenya and Farm Concern International (FCI)