The estimated farm gate value of sweet potato and bananas is USD 371 Million and USD 2 billion respectively. Their potential to feed the world is set to increase following the Seed-Farmer-Market Consumer (SeFaMaCo) Programme interventions by Farm Concern International with funding from Bill and Melinda Gates FoundationÂ 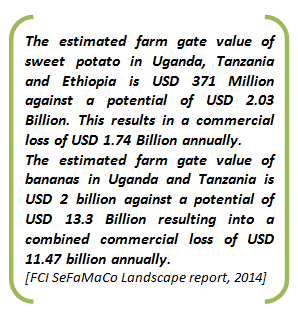 Agriculture is the main industry in Sub Saharan Africa (SSA), employing 65% of Africaâ€™s labor force and contributing about a third of its Gross Domestic Product (GDP).Â Agriculture is mostly done by smallholder farmers who own about 2 hectares or less of land.Â

Sweet potato and bananas are important crops cultivated in various regions of Uganda, Tanzania and Ethiopia. Banana production is highest in Uganda and Tanzania with yields of 11.1million metric tons (11.57%) and 3.9 million metric tons (4.0%), respectively. Â However, consumer demand exceeds the supply due to low productivity.

The low productivity is attributed to soil degradation as well as severe pests and disease outbreaks, (bacterial wilt and sigatoka and nematodes) coupled with other factors such as unorganized smallholder farmersâ€™ production and marketing systems, and insufficient inputs supply systems. Smallholders grow bananas on average farms sizes of about 0.15â€“1.0 hectares in predominantly rain-fed systems. Â

The SeFaMaCo Landscape Analysis was undertaken by Farm Concern International with funding from the Bill & Melinda Gates Foundation (B&MGF) from November 2013-April 2014 involving 204 institutions. It proposes innovative interventions at Farmer level for increased production and commercialization of both sweet potato and bananas by smallholder farmers, ultimately feeding the world.Â

The annual production of sweet potatoes in Tanzania is estimated to be about 2.4MT, produced from 56,000ha of land compared to Uganda, whose estimated production reached 2.8 million MT in 2010 from 540,000ha of land, with an average yield of about 4.1t/ha. Â The productivity in Tanzania is Â 4.2 t/ha, with most of it being produced in 21 regions around the Lake Zone (Mwanza, Shinyanga, and Kagera), Southern Highlands (Ruvuma), Western Zone (Tabora, Kigoma) and Eastern Zone (Morogoro, Coast, and Dar-es-Salaam). Â In Ethiopia, sweet potato production increased from 25,000ha to 53,000ha of land with resulting into 403,000MT.Â

The low productivity is attributed to soil degradation as well as severe pests and disease outbreaks, (bacterial wilt and sigatoka and nematodes) coupled with other factors such as unorganized smallholder farmersâ€™ production and marketing systems, and insufficient inputs supply systems. Smallholders grow bananas on average farms sizes of about 0.15â€“1.0 hectares in predominantly rain-fed systems. Â As a result, Uganda has a dormant capacity of 86% of the potential yield estimated to be about 17,032,800MT, while Tanzania has a capacity of 81% as shown in figure 1 & 2 below. Â 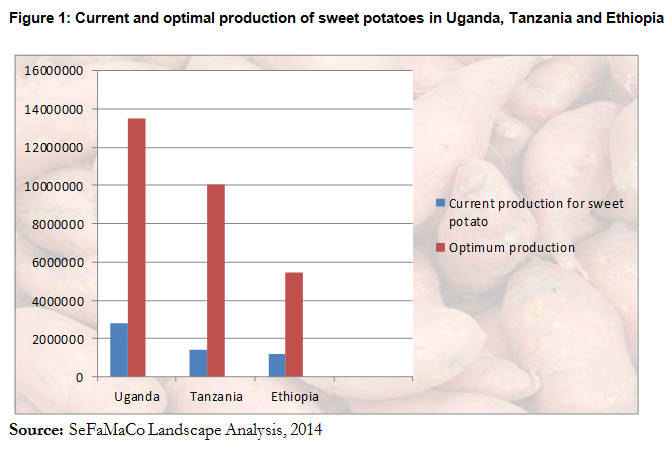 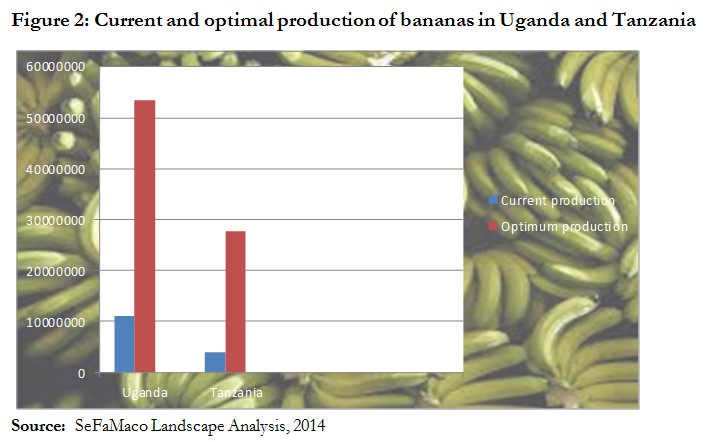 If this is exploited, there is potential for increasing productivity to 35Mt/ha and 60Mt/ha in Tanzania and Uganda respectively.Â

To tap into the potential and dormant capacity within the three countries, the Seed-Farmer-Market Consumer (SeFaMaCo) model being implemented by FCI and other Partners aims to commercialize the production of both sweet potato and bananas through the innovative Commercial Villages Model (CVM).Â

The Commercial Village Model is designed to sustainably deepen the impact through enhancing vibrant agri-trade enterprises among a large number of Commercial Village trading blocs to attract community-wide investments in more cost-effective and efficient approaches. The Commercial Villages are geared towards evolving typical African villages into commercialized villages which operate as business units and further evolving villagers and neighbors into business partners. Through the CVs, farmers within identified geo-administrative areas which comprise several villages graduate from subsistence to commercialized production, where smallholder producers are able to attain economies of scale and mobilize social capital in production and marketing that is not achieved by smaller farmer groups.

The Commercial Village Model at the farmer level will be implemented to promote optimal yield production for sweet potato production in 0.75 acres bringing the cumulative land production area under sweet potato to 77,190 acres within the three countries. The Programme aims to enhance overall production of the targeted households up to about 112% in Tanzania and Uganda and up to 211% in Ethiopia. Similarly, the Programme will target 90,071 banana smallholder farmers within Uganda and Tanzania by putting 1 acre under production in these countries as shown in the table below.

Smallholder commercialization is aimed at graduating smallholder families from subsistence farming which currently characterizes banana smallholders in Tanzania and Uganda to a market-led production through use of productivity enhancing inputs and technologies. Commercialization initiatives will further focus on strengthening the capacity of the farmer groups and farmer organizations to enhance collective action in sourcing for quality inputs, marketing and savings for increased household incomes for banana smallholder farmers.