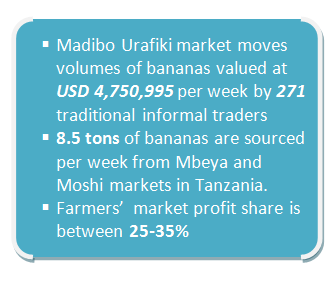 In Africa, agricultural marketing begins at the level of individual smallholder farmer, since as producers, they also consume part of what is produced and some marketed.

The total global production of banana ranks fourth after maize, rice and wheat (CGIAR, 2014). The production of ten most leading banana producing countries is estimated to be about 95.9 million metric tons (FAOSTAT, 2012). Uganda andÂ

Tanzania are among the two African countries featuring among these top 10 producers, contributing about 11.57% and 3.9 million metric tons (4.0%), respectively. In 2012 the volume of global gross banana exports reached a record high of 16.5 million tons (FAO, 2014).

Bananas are the worldâ€™s most popular fruit and one of the worldâ€™s most important staple foods, along with rice, wheat and maize. In 2011, 107 million metric tons of bananas were produced in more than 130 countries on 0.1 per cent of the worldâ€™s agricultural area, for a total trade value of USD 9 billion (Food and Agriculture Organization of the United Nations (FAO), 2013) and a retail value of approximately USD 25 billion. Bananas have a high rate of domestic consumption, with only about 17 % of bananas exported to foreign markets annuallyD

The market demand for banana in Tanzania has been on the increase due to a growing population and changing consumption patterns. The increasing demand is also attributed to bananas being the staple food, its popularity at breakfast and availability all year round. Up to about 70% of the bananas produced in Tanzania is consumed by the producing households. In Tanzania, about 30% of the banana produced is used for local brewing and only about 8% is sold fresh. Â

The informal marketing of bananas is mostly done by both by men and women as well as youth. However, more men are involved in the business. Â Banana marketing channels include local traditional informal markets, urban wholesale and retail markets, cross-border regional markets and cottage processors, with most of the bulk produce being sold in local and nearby markets to traders.

Madibo Urafiki market in Dar es Salaam Tanzania is one of the major trading informal markets in Tanzania. It is an urban market that serves both the wholesalers and retailers within the capital city selling a variety of agricultural produce. There are an estimated 271 informal traditional banana traders in the market with each trader selling an average volume of 8.5 tons per week, where itâ€™s estimated that the monthly banana trade is about USD 4,750,955. The key marketing cost was found to be banana sourcing which accounts for 73% of the total marketing costs by the traditional informal traders.

The Seed-Farmer-Market Consumer (SeFaMaCo) Landscape Analysis, 2014 report reveals that farmersâ€™ market profit share for banana is between 25% and 35% while tradersâ€™ share was 58%.