This brief provides market information and in depth analysis on the agricultural and horticultural commodities traded in Arusha and Moshi markets. Â The content here in is derived from a Rapid Market Assessment conducted in 7 markets across Arusha and Kilimanjaro regions by Farm Concern International (FCI) with funds from HiVos through Agri-Nutrition for Coffee Zone in Tanzania project.

Agri-trade in Arusha and Kilimanjaro regions in Tanzania is male dominated. In both Arusha and Moshi, men account for 62% of the total trader population. 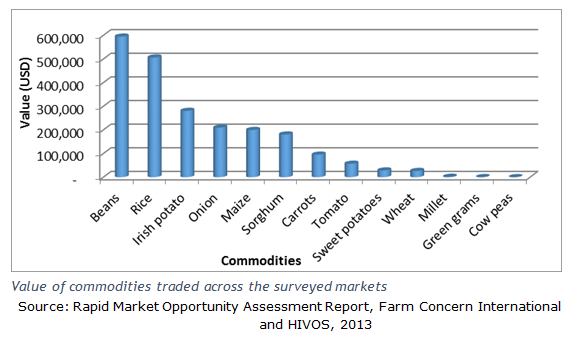 This could be due to the fact that these markets are predominantly involved in wholesale business which tends to be more elaborate since wholesalers are involved in bulk trading hence requiring more agility that tends to lock out women. On the other hand, women tend to dominate retail markets because trading is less bulky, involves less travel and lower risks and requires less capital outlay, however, business returns/incomes are relatively low in retail trading.

Beans, rice, Irish potatoes and bulb onion are also the most highly traded commodities in terms of value share traded per month partly indicating that traders do invest more to trade in these commodities due to their demand. The above said commodities are also in high demand; they are traded in relatively large quantities and are among the most frequently sourced commodities by wholesalers.Â 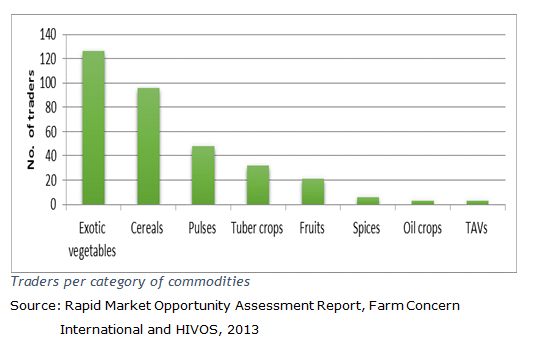 Sourcing is influenced by various factors including demand levels, rate of stock turn over, perishability nature of the commodity, storage facilities logistics of supply and cost involved in sourcing among others.Â

Agri-trade in Tanzania is lucrative. In Arusha and Kilimanjaro regions, the sector moves over US$ 1.59 million monthly based on the output of the four leading commodities (beans, rice, Irish potatoes & onions). The sector however heavily suffers price inflation caused by inundating of commodities in the market. Due to high dependency on rain-fed farming most farmers grow crops during the same season causing an imbalance between supply and demand of the selected commodities. Farmers should therefore be advised to adopt modern farming technologies that support production across all seasons.Â