E-warehouse,Â Â programme implemented by Farm Concern International (FCI) in Meru County in Kenya has improved the lives of smallholder farmers. The programme encourages farmers to store their produce after harvest and wait for the market prices to increase. Farmers have come to appreciate the fact that selling immediately after harvesting is often a loss to them as prices usually decline during harvesting season.Â

The beneficiaries of the E-warehouse intervention hav 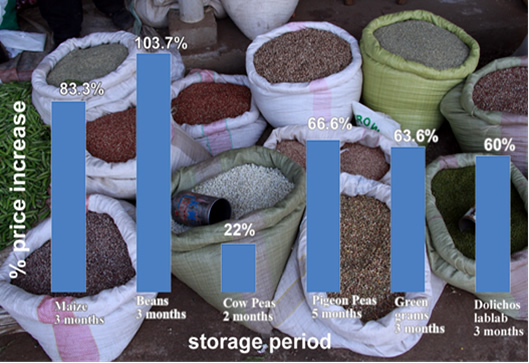 e been trained on the importance of holding on to their commodities and taking collective action through Commercial Villages (CVs) as a means of overcoming the marketing challenges that have existed for years. Applying the multi-disciplinary approach to development, FCI has facilitated market linkages to farmers who have stored their produce for selling at a future time when prices were higher.Â

All the key players within the value chain can now attest that business with farmers in the CVs is more efficient and promising than before. In addition, traders are able to amass volumes from the collective stores within a few hours thus saving on transport, time and other transactions cost while the financial intermediaries rests assured that money given to farmers would be paid in due time. Â

The project continued to attract more farmers especially with the use of M-pesa which generated incredible benefits. As a result, the Village Knowledge Workers (VKWs) registered additional smallholder farmers. Currently, a total of 7,195 farmers have been registered to participate in grain commercialization under e-Warehouse project in Tigania East and West sub-counties. Out of the total number of farmers registered, 4,812 farmers have been accepted in Taro works - the newly introduced technology based system.

Awareness creation for any project plays a key role in sustaining generated project benefits. To achieve this, under E-warehouse project, FCI continued to sensitize communities and the relevant stakeholders about the project. A total of 84 awareness forums were conducted on 30 CVs and 333 Commercial Producer Groups.Â

In addition, FCI has conducted a number of stakeholder forums with the Ministry of Agriculture, input suppliers, buyers, processors, local administrators, financial institutions among others. Â As a result of these sensitization forums, the project has received great support from the community, private sector and the government agencies.Â

The information was beneficial to farmers especially in the month of April/May planting season. Agronomic content was loaded in VKWsâ€™ smart phones where 2,320 content searches were done by the VKWs and disseminated to farmers. The use of mobile telephony helped farmers access the best agronomic practices easily.Â

As a result of this, majority of farmers participating in the e-Warehouse project have adopted utilization of quality seeds and fertilizer use which has improved their productivity. It is projected that through trainings on Good Agricultural Practices (GAP), farmers will continue enjoying bumper harvest and maximum profits for the same.