When Mr Daniel Gakuo initially started farming, he not only practised it out of the passion but he also dreamt of training his fellow farmers. He is realising his dream after he met Farm Concern International (FCI) through the Commercial Village Model (CVM) that brings and groups farmers together into commercial villages. 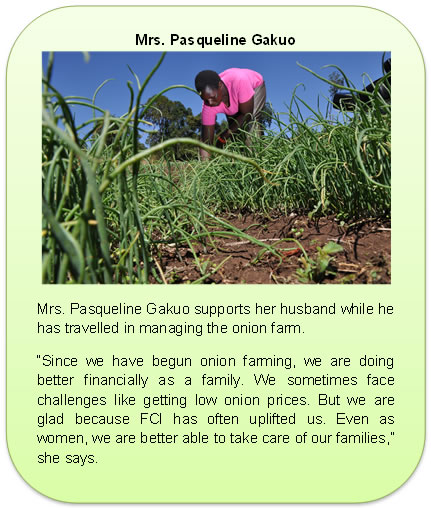 Mr. Gakuo, a member of Mwiyogo Commercial village, Kieni West, Nyeri County is one of the beneficiaries of the DoHoMa intervention through FCI. Mr. Gakuo grows onions all year-round and has been contracted by various bulb onion seed producing companies who are doing research on one of his four farms.

The seed producing companies bring seedlings to his three-acre demo farm, where he plants them in nurseries, and then transplants them to the farm. If the seeds mature as expected, he sells them to farmers in the village but prioritises the commercial villages.

Some of the factors that determine seed acceptability are adaptability to local conditions in terms of duration to maturity, bulb formation, and colour in relation to market requirements.

Mr. Gakuo also monitors germination rate, resistance to diseases and drought, compatibility, curing and shelf life. He has therefore been influential in introducing hybrid seeds that will bear high yields to the farmers, eliminating the risk of planting low quality seed. From growing hybrid seeds, farmers in Kieni West have been able to get at least 20 tonnes per acreage, a 60% increase from the eight tonnes they would get from the old pollinated varieties.

Mr. Gakuo is delighted that he has been able to help his fellow villagers.

Mr. Gakuo expresses high levels of satisfaction as a farmer, and now a trainer. “In 2012, as I saw my own farming business grow, I also desired to be a consultant helping farmers outside the Kieni West area." Three years later this dream has came true. "I am now a full time consultant, conducting about eight trainings in a month in different areas in Kenya. I earn Kshs 6,000 per hour. In a month, I have about eight trainings. However, in the Kieni area, my training to the farmers is free,” he says.

Mr. Gakuo says one of the challenges the farmers have encountered is receiving spoilt seeds from some seed companies. “We are encouraging farmers to buy seed through Afma,” he says.

In the future, Mr. Gakuo plans to open a warehouse so as to train fellow farmers on post-harvest management, so that they are able to monitor market prices and sell when prices go up.

Out of his onion business, Mr. Gakuo has been able to educate his own children as well as his relatives’ children. Two of his daughters are students at local universities.

“I am grateful that from onion farming, I have been able to educate my family and help my relatives. I have also bought a piece of land near the road where I want to build.  However, what I do is mostly for others. I enjoy uplifting others,” he says.