Value addition is one of the methods appropriate in reducing postharvest loses and increase food security and income to smallholder farmers and other actors along the value chains. Farm Concern International (FCI) has been in the front line to contain post-harvest losses through value addition. 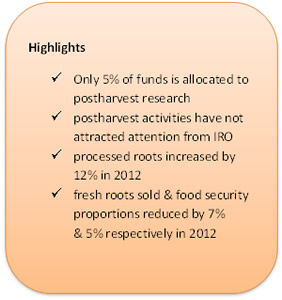 Although minimizing postharvest losses of already produced food is more sustainable than increasing production to compensate for these losses, less than 5% of the funding for agricultural research is allocated to postharvest research areas (Kader, 2003). In addition, Goletti and Wolff (1999) stated that “while research on the improvement of agricultural production has received considerable attention and funding, until recently postharvest activities have not attracted much attention from international research organizations (CGIAR, FAO, ACIAR, IDRC, GTZ, CIRAD, NRI, USAID).”

However, value addition in Cassava Commercial Villages under the CVPP programme in kenya, Uganda and Tanzania have proved to be viable business units where trade has been enhanced through innovative village based business forums, building trust between smallholder farmers and buyers. This has led to increase in volumes of cassava products traded across the three countries.

However, there was no significant change in the proportion of the processed roots. With commercialization, the demand for fresh roots increased with smallholder farmers becoming more food secure. Overall, there has been a progressive increase in the proportion of cassava traded.Furthermore, the analysis indicates that more effort is needed to increase value addition for fresh cassava roots that would end up in the increments of food security in East Africa. The graph below indicates a comparison between the processed roots and the fresh roots sold between January 2012 and January 2013.

In addition, the proportions of processed roots remained constant towards January 2013 with established trade relationships between the commercial villages and respective buyers. This requires further strengthening and improving efficiency in terms of delivery, quality management and payment modes.  To achieve these, FCI forms strategic partnerships with relevant stakeholders like the Government, County governments, private sector, input suppliers, financial institutions, formal and informal markets, Kenya Agriculture and Livestock Research Organization, Ministry of Agriculture etc. to facilitate the smallholder farmer in quality production and marketing. The smallholder farmer remains the main subject of FCI in ensuring that maximum potential has been unlocked to reap the full benefits of entire investments.