After a value chain analysis; green gram among other commodities recording high wholesale demand were prioritized and buyer partnerships established, resulting in Commercial Villages adopting green gram improved varieties for commercialization. Additional to her livestock, Ms. Dida was growing maize and beans on half an acre with an earning of Kshs. 6300 from maize and Kshs. 7,500 from beans totaling to Kshs. 13,800 (USD 138) per season. From the same piece of ½ acre, Hakule earned Kshs. 19,250 (USD 193) from green grams and saved Kshs 900 (USD 9.06) on transport since the Commercial Village supplied a wholesaler who picks at farmgate. This was after Farm Concern International developed market partnerships and facilitated commercialization campaigns under the Agro-pastoralist Commercialization and Markets in Nothern Kenya Programme supported by TearFund.

During the commercialization campaigns, FCI introduced market-led production of green grams, which is a drought resistant crop with the growing trade volumes, but had been sourced from other areas by traders in these the Agro-pastoralists zones. Green gram was prioritized due to its high acceptability in the Kenyan market. Having been oriented to market-led production and collective marketing, it dawned on Ms. Hakule Dida that farming right has great potential to earn more. After adoption of green grams farming in April 2015, Ms. Dida harvested 175 kgs from one acre. She sold 150 kgs at 110 per Kg earning Kshs 16,500 (USD 165); the highest she has ever made from her one acre piece of land. “I did not know green grams have such high profit margins. I will now reduce production of other crops and increase land under green grams in October season,” she said.

Before FCI began implementing the programme in Marsabit County, Ms. Dida was growing maize and beans; crops whose volumes traded in the county were relatively low due to low purchasing power of the community as well as low production. The half-acre under maize production would yield a total of 210Kgs. She would sell 100kgs at a value of KES 3,000 (USD 30).The other half was under beans producing a total of 150 kgs. She would sell 70 kgs at KES 50/kg fetching her Ksh 3,500 (USD 35). In total, she would make Kshs 6,500 (USD 65). FCI in partnership with the Ministry of Agriculture introduced N26 green gram variety to the farmers. The Ministry of Agriculture also supplied 350Kgs to the farmers. Ms. Hakule Dida received 2kgs of the high quality improved variety.

From the sales she made, she paid off a group loan worth KES 6,200 (USD 62) and restocked her village shop with stock valued at KES 5,500 (USD 55). Ms Hakule Dida did not incur the Kshs 900 (USD 9.06) cost of transport to Marsabit town that she used to spend travelling to sell maize and beans at Marsabit town. This is because FCI linked her Commercial Villages to buyers through the Commercial Villages aggregation centers who went to the village to buy the green grams. Ms. Hakule has become a model farmer in Dirib Gombo Commercial Village and plans to use proceeds from sale of green grams in the next season to lease a two acre piece of land to plant green grams. 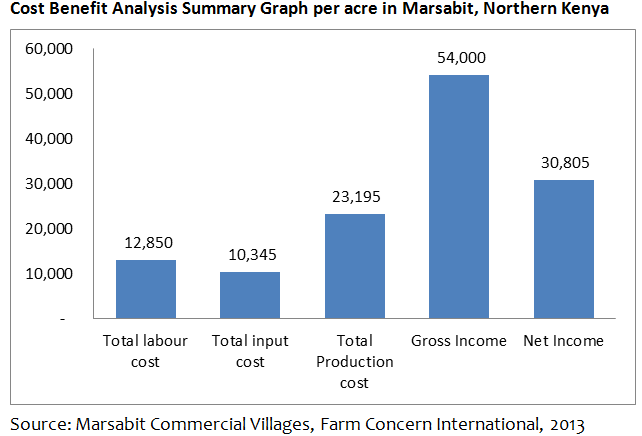 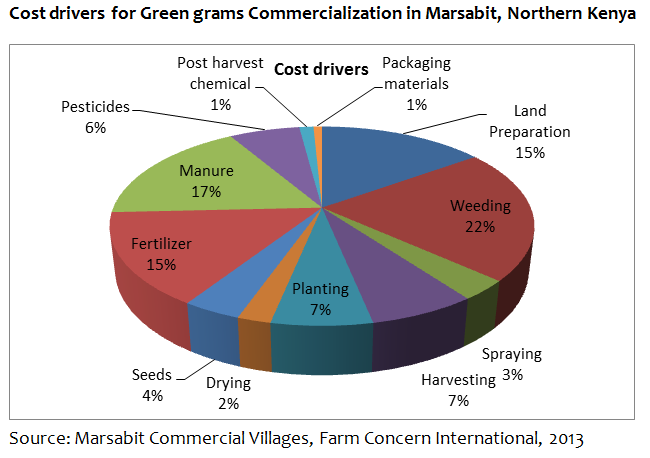