Over 1,000,000 smallholder Farmers to benefit from SeFaMaCo programme targeting banana and sweet potatoes in Uganda, Tanzania and Ethiopia.

Over one million banana and sweet potato smallholder farmers are set to benefit from the SeFaMaCo programme in securing access to clean planting materials, increased farmer skills knowledge and reliable markets for improved economic livelihoods. SeFaMaCo programme is a four year initiative, titled Integrated Value Chain development and smallholder farmer commercialization of Banana and Sweet potato for Tanzania, Uganda and Ethiopia based on a Seed- Farmer-Market and Consumer model.

Speaking during the launch of the programme in Moshi, Kilimanjaro region at Farm Concern International (FCI’s) office, the Director of Crop Development at the Ministry of Agriculture, Food Security and Cooperatives, Mr. Twahir Nzallawahe called on farmers in the targeted regions to participate in the project due to the benefits that will result therein. 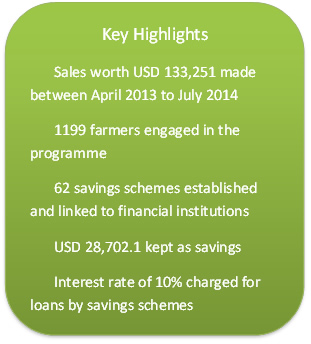 “This is a very unique project in Tanzania. I call on farmers to utilize this opportunity well knowing that such programmes are few and far between hence maximizing this opportunity to build strategic alliances in business, increase incomes and improve livelihoods” said Twahir. Kilimanjaro Regional Commissioner (RC), Mr. Leonidas Gama, hailed the project, saying it will give Tanzania an extra mileage, and therefore called on smallholder farmers to embrace the programme and seriously embark on full production of banana and sweet potatoes because of its nutritious value and economic viability.

FCI Africa Director, David Ruchiu said the SeFaMaCo project provides an opportunity to Africans in addressing underdevelopment. "Food demand is increasing around the world; hence the need for Africa to produce 56 % of the food requirements by 2050. Luckily for Africa 60 % of arable unutilized farmland is in Africa. It will therefore require a concerted effort particularly in Africa to seize the opportunity. This cannot and will not be done by one single individual or one organization, that’s why our future is in partnerships".

"We envisaged a partnership which will translate into engaging hundreds of thousands of farmers as respectable players in sweet potato and banana value chain in three countries," Ruchiu said.

While giving his remarks, Orion Hasson, Programme Officer from BMGF said that the Foundation has been working with FCI in the past one year to set up the SeFaMaCo programme that is structured from the Seed to Farmer to Markets and finally to the Consumer. “We are very excited to be here at the launch of the programme and I would like to tell all of you Karibu to SeFaMaCo”, said Orin.

According to Orin, the BMGF has observed that agriculture provides an opportunity for the smallholder farmers to improve their economic livelihood. In this regard, the Foundation now focuses on 7 African countries, including Tanzania, Uganda and Ethiopia, and 9 staple crops including sweet potato and bananas.  “ The Foundation is excited about this project since the crops of focus have a high market potential,  provide food nutrients to the smallholder farmers and are least affected by pests and disease” Orin said.

While concluding his speech, Orin on behalf of his colleague Kristen McNaughton  and the Foundation  made the  following remarks about the SeFaMaCo programme launch and how he felt  honoured to be part of the event:-

SeFaMaCo programme will assess viable opportunities, barriers, consumer markets, sustainable innovations and understanding the business environment along the seed-farmer and market-consumer value chain, targeting to revolutionize agriculture by synchronizing efforts of seed suppliers, farmers, market and consumers to achieve better results than they otherwise would in their individual capacities. SeFaMaCo programme is funded by the Bill & Melinda Gates Foundation (BMGF) and implemented by Farm Concern International (FCI) in partnership with partners and other strategic partners along the banana and sweet potato value chain in the three target countries.

The targeted regions for sweet potatoes and bananas under SeFaMaCo programme include Arusha, Kilimanjaro, Kagera, Mwanza, Morogoro and Zanzibar in Tanzania, while in Uganda; the project will be implemented in Kamuli, Soroti, Mbarara, Masaka and Mukono. In Ethiopia, the programme will be implemented in Wolaita, Sidama and Gamogofa regions. The SeFaMaCo programme launch was attended by over 350 people including development partners from Uganda, Ethiopia, Tanzania, strategic partners, development partners, private sector players and smallholder farmers from the region.