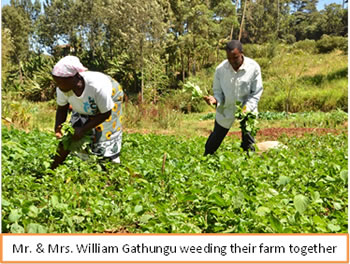 William Gathungu and his wife Mary are among the households in the Domestic Markets Regional Programme implemented by Farm Concern International with support from Bill and Melinda Gates Foundation that have realized the nutritional and economic value of growing Traditional African Vegetables (TAVs). They are members of Kahuho Commercial Village in Nairobi Kenya. Before Farm Concern International intervention, the couple was growing TAVS on less than 1/8 an acre.

After commercialization training, they allocated half an acre of their land to TAVs. The commercialization campaigns were geared towards helping the farmers realize the commercial and nutritional value in the TAVs. People who eat fruit and vegetables as part of their daily diet have a reduced risk of many chronic diseases including stroke, cancer, heart diseases and type-2 diabetes.

“I have now realized that TAVs have the highest nutritional levels and so I now prioritize them on the farm. Before FCI introduced TAVs to us, we were not eating them regularly, but now we eat them at least daily, even if it’s a small portion. I feel physically stronger and physically fit,” William says.

He works together with his wife on the farm to plant, weed, and transport manure. Mary ensures that the Traditional African Vegetables are prepared in a way that preserves the nutrients.

“I ensure that my family eats TAVs daily. In order to preserve nutrients, I first wash them before cutting. I also don’t cook them for long because overcooking TAVs kills nutrients,” she says.

William sells TAVS twice a week at the nearby Wangige market and makes about Kshs. 1,000. From selling TAVs, he has been able to build a semi-permanent structure, pay school fees for his two children, buy a goat as well as pay the family’s electricity bills.

“I am also able to save Kshs 1,500 every month. I have opened a savings account with Equity Bank. The money I save is used to buy inputs whenever I need them,” he said.

In the near future, William intends to acquire more land which he can use to grow more TAVs.

“I encourage my fellow farmers to plant TAVs even if it’s on a small portion of land. This is a good way for my smallholder farmers to start out small and increase their income,” Mary says.