From the adoption of proper African eggplant growing methods, Simon Daniel is now harvesting twice the number of bags he used to harvest. 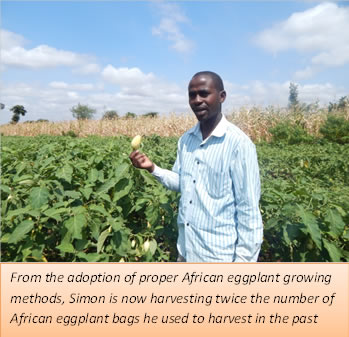 Farm Concern International (FCI) made this possible through various capacity enhancement initiatives at Manyire commercial hut as well as exposure visits. “I have learned the proper use of inputs as well as records keeping. Each time I harvested, I learned to record the quantities,” Simon continued to say. This was possible through the various trainings facilitated by FCI in collaboration with various Input suppliers at Manyire commercial village.

Through fruity vegetables and maize production, Simon not only increased his capital but is also able to carter for his children school fees, shelter and provide enough food for his family. Early 2015, Simon started constructing his new house and is hoping to complete it at the end of this year. He was also able to purchase cattle for fattening and later sell at higher price which earned him money to build his house. Simon is a member of Tumaini Commercial Producer Group. He is married and has three children.