Elias Makori joined Valeska Commercial Village in 2010 after a commercialization campaign by FCI under the Tanzania Domestic Markets Programme funded by Bill and Melinda Gates Foundation. January 2014 was a turning point for his life when he got an order from National Milling Corporation traders to supply five bags (250kg) of African Night Shade per day for three months at TZS 60,000 (USD 35.27) per bag. 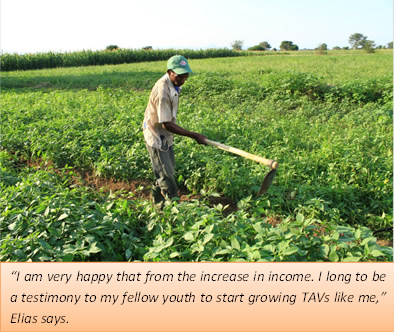 After completing primary school education, most youths in Valeska village, Tanzania, end up in tanzanite mining as a way of seeking fortune. Tanzanite is a rare blue gem and a popular alternative to blue sapphire. Elias Athanas joined his comrades in 1999 when his family lacked sufficient funds to take him to high school, but his luck would change when farming would provide him with a steady income as opposed to mining. To increase his small income at the mine, he engaged in maize production on the two-acre piece of land given to him by his father, but had low yields of 1000kg compared to the 4500kg potential after using proper agronomic practices. After harvest, he would sell at the nearby Merelani market and earn a mere TZS 300,000 (USD 379.00) per year.

In 2010, he started growing African Night Shade and kales on a quarter acre which resulted to yields of 4,750kg. Persistent low vegetable demand got him a total of TZS 760,000 (USD 519.94) per year. In September 2012, FCI conducted commercialization campaigns at Elias' Village and trained farmers on farming, production and nutritional benefits of Traditional African Vegetables (TAVs) and market linkages.

An agreement was reached through which the farmers would cultivate vegetables and sell to the traders who would then buy at agreed prices hence meeting consumer requirements. This motivated Elias to increase his TAVsâ€™ production from a quarter to one acre which in turn increased his yields and income. In his first season, he harvested 9,650kg and got TZS 5,190,000 (USD 3,333.95), in his second season; he harvested 7,250kg and got TZS 1,038,000 (USD 666.79). This income helped him to start the construction of his own brick house; but due to drought, he was unable to complete it or even cultivate vegetables for the rest of the year.

January 2014 was the turning point for Elias when he got an order from National Milling Corporation (NMC) traders to supply five bags (250kg) of African Night Shade per day for three months. Each bag was sold at, TZS 60,000 (USD 35.27). In total, he made TZS 300,000 (USD 176.37) per day. From this income, he was able to complete the roofing of his house, paint it and fit windows. To ensure constant supply of produce to his customers, he came up with a simple scheduling strategy of transplanting seedlings from the nursery bed and planting what was required on the one acre he had dedicated to growing of TAVs. Elias is very happy about his increase in income and being a testimony to his fellow youth and influencing them to start growing TAVs.Â