Mr. Ndaka is an outstanding farmer who believes in doing things big and right. The 63 year old farmer is a go getter who stops at nothing but profits accrued from farm products. When Cassava Commercialization & Village Processing Initiative was introduced in Kathonzweni Sub County, Mr. Ndaka took the initiative positively and put 2 acres of land under cassava hoping to get good returns. His successful sale of cassava, gave him the confidence to double his land under production of cassava where he has now 4 acres of land and he is planning on the next sales along with his neighbors in Mbuvo Commercial Village, which was established in 2010. He is successfully using his income to pay school fees for his daughter and meeting his familyâ€™s basic needs.Â

The vision of Mbuvo Commercial Village is to eradicate poverty through investing in market-led production of cassava for food security and household income. The initiative resulted from village commercialization campaigns conducted by Farm Concern International, FCI, with support from Alliance for a Green Revolution in Africa (AGRA) under Cassava Village Processing Programme. The campaigns were geared towards unveiling the market opportunities in cassava farming, village processing and collective marketing of cassava products through the FCI Commercial Village Model. FCI facilitated formation of Mbuvo commercial village governance and leadership systems through organizing 250 farmers into 8 Commercial Producer Groups (CPGs) which formed a trading bloc. This facilitated linking the groups with other interested stakeholders and buyers who created a huge demand for cassava cuttings and tubers. Â FCI linked the Commercial Village with Kenya Agricultural and Livestock Research Organization (KALRO) which trained them on modern farming activities and introduced them to new improved varieties of cassava cuttings. Â

As a result, 32,315 cassava cuttings were bought from KALRO Katumani at a cost of USD 697.95 and planted on 15 acres of land. Although the rains failed them at the end of 2010, the Commercial Village mobilized its members to plant again in March 2011 in the 600 acres bought by the 300 members and a total of 16,016 metric tons harvested was consumed domestically while the excess was chipped with a chipper supported by FCI. With the introduction of the Cassava Village Processing Initiative in 2014, Mbuvo CV has gone into product diversification by growing green grams and cowpeas from which they earn a total of USD 75,260 annually.

Currently, the Commercial Village has a virtual advantage over the other Commercial Villages due to e- learning and training kit provided by FCI. The kit contains various training modules that the CV members use to train themselves on Good Agricultural Practices, nutrition, post- harvest management and financial management. The CV was also linked to private sector and wholesale buyers, research organization, Ministry of Agriculture and input companies and seed entrepreneurs to access improved planting materials and quality inputs. Mr. Ndaka is a classic example of the impact of the Commercial Village Model and how cassava can be used by small holder farmers for climate change resilience and food security. Â

To Mr. Ndaka, he was just trying because he was not very sure of the market because growing large scale cassava was not a Â  common practice in the community, what the farmer was sure of is that a few farmers grew local cassava varieties for many years and sold to local traders earning very little money. However, Farm Concern International partnered with Kiuuku Commercial Village where Mr Ndaka is the chairman and committed to link farmers to markets for cassava and other value chains.Â

When the cassava in Mr Ndakaâ€™s farm matured, money was just a call away; Cassava Option Ltd was linked to this farmer and business begun, as at today Cassava Option has harvested over 6 tones from Mr Ndakaâ€™s farm earning him ksh. 96,000 for fresh cassava, part of this money has been used to pay school fees for her daughter, meet family basic needs and the rest ploughed back to the farm by preparing land in readiness for planting more cassava.

Mr Ndaka planted 4 acres of cassava in November 2015 and has continued to harvest the tubers and kept the cuttings looking forward to sell them at a later date when prices are at peak. Interestingly, this farmer used 40,000 cassava cuttings which he had stored as he was advised and trained by Farm Concern International; he used 20,000 cuttings for his 4 acres and sold 18,000 cassava cuttings at ksh 2 per cutting earning kshs 36,000. Mr Ndaka is a fulfilled man and a witness of the dawn of cassava commercialization in Eastern Kenya. The table below gives an idea of the kind of profit one makes, as well as the amounts of money spent on inputs. Cassava, therefore enables farmers to make profits and easily take care of their needs and better their livelihoods. 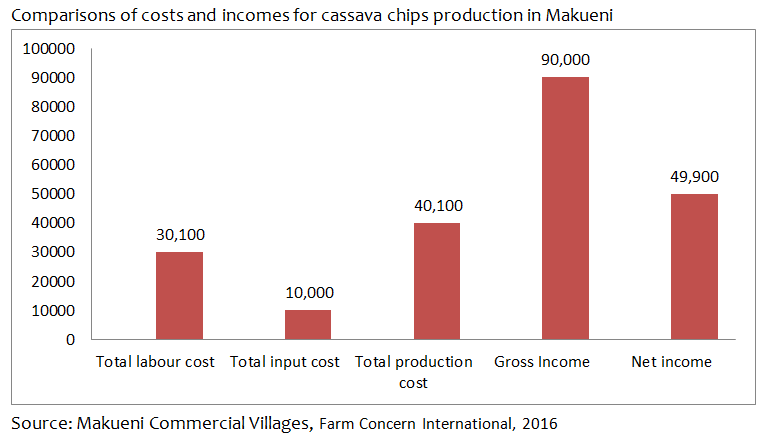 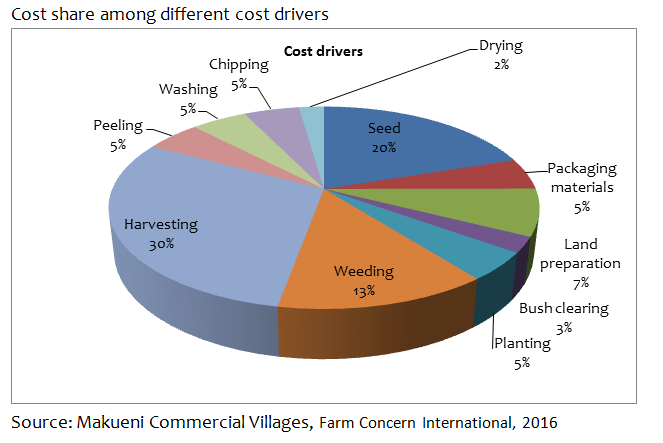 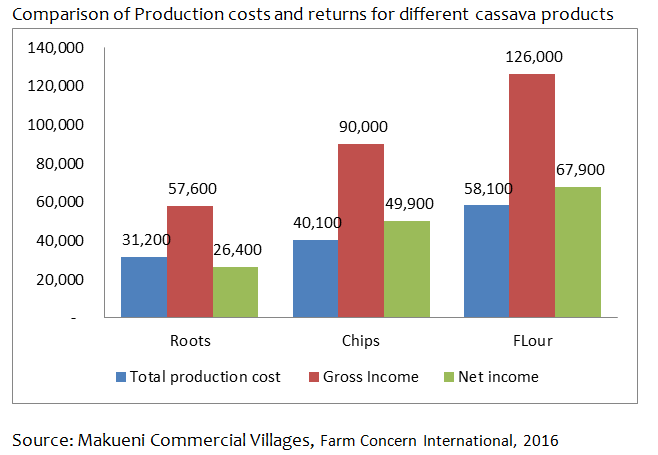