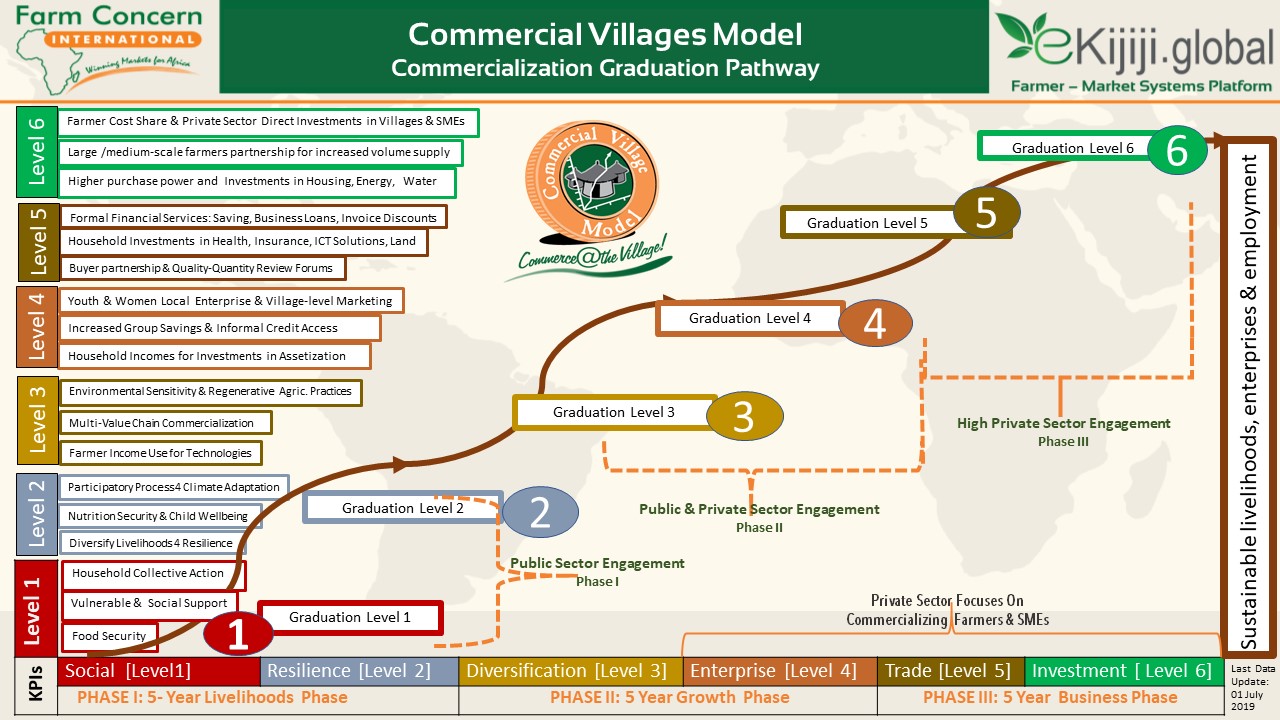 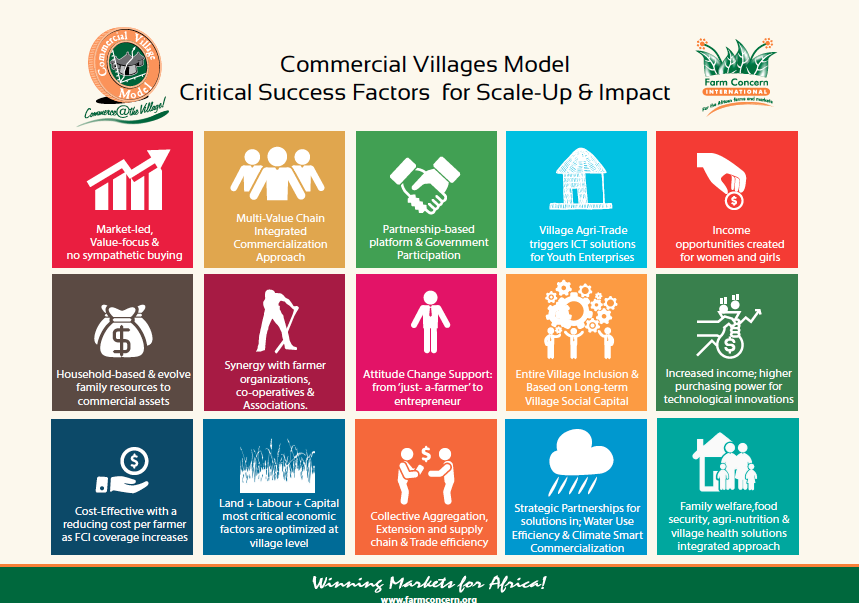 A 12- Year tested, implemented and upgraded innovative business Model for value chain analysis smallholder commercialization, food security, aggregation & market access. The model, developed and upgraded by FCI over more than a decade, is a multi-value chain innovative smallholder commercialization and aggregation business model for market access. The implementation approach also includes a socioeconomic concept that delivers to the last mile. The model has experientially been applied in 8 Countries with 132 partners. It is currently being rolled out across Africa for scale-up in multiple impact investment and development initiatives.

The Commercial Villages Model (CVM) is a hybrid model through which typical social administrative villages are designed and systematically graduated into commercialized competitive market-led agricultural production units. It is supported by a business incubation and graduation pathway that is efficiently organized to evolve social administrative villages into commercial villages that meet the modern markets quantity and quality (Q&Q) requirements through bulking and quality assurance.

Commercial Villages are developed to meet these market demands competitively, efficiently and sustainably. The CVM does not replace existing farmer systems but has been designed to integrate and upgrade existing systems. Various development organizations, private sector and Governments have adopted the Commercial Villages Model.

These groups have a leadership and governance structure that evokes participation from the CPG level to the CV level. The leadership and committees enable the village to wholesomely incorporate various aspects in the departments namely; Production and Natural Resources Management (NRM), Finance, Micro Insurance & Investments, Marketing & Value Addition, Village Social Capital and Youth Integration. Two (2) representatives are drawn from each CPG to form the CV leadership that way every farmer is adequately represented.

Charles Sekazuba, a resident of Kinigi in Northwest of Rwanda, has benefitted from Farm Concern International, FCI’s market linkages under the Rwanda Multi-Value Chain and Enterprise Development Programme implemented by Farm Concern International with support from World Vision Rwanda. His profits have had a 733% increase to between 2,300,000 to 2,500,000 Rwf from 300,000 Rwf per season.  Charles cultivates Irish potatoes on his farm. Previously, brokers (middlemen) and transporters gave him wrong market information on markets prices and benefitted more than him... Read More

Farmers in Eastern region are reaping millions of shillings from sales of green grams, tomatoes, water melons and onions amounting to Ksh. 1,306,080. The increase in sales was attributed to capacity building forums and exposure visits to other regions of Kenya to learn various aspects of agronomy and markets carried out by Farm Concern International (FCI) and World Vision Kenya under the Semi- Arid Region Commercialization Programme which is funded by World Vision Australia... Read More

Mr. Khoswe sells onions and tomatoes and cabbages during peak seasons at Thondwe Market. He could not procure enough volumes until he was linked to Commercial Villages (CVs) by Farm Concern International, FCI under the Domestic Markets Regional Programme funded by Bill and Melinda Gates Foundation. Mr Khoswe cherishes the exposure and training on business planning and development by FCI which has enhanced his capacity to procure produce and manage and grow his business... Read More

Sometimes, you just need a little push from outside to realize your full potential. This is the case for Miangeni Commercial Village (CV), one among several villages that World Vision Kenya (WVK) and Farm Concern International (FCI) have partnered with under the Semi- Arid Commercialization Programme. The main objective of the partnership was to improve the livelihood of farmers through increased production, adoption of new farming technologies and market linkages... Read More

Kafulama Commercial Village smallholder farmers realized sales worth over USD 7,000 from collective marketing under the Malawi Potato commercialization Programme supported by IFAD and implemented by Farm Concern International, FCI in partnership with Ministry of Agriculture and market partnerships with traditional informal wholesale buyers and processing companies. They also increased their yields from 700kg of Irish potatoes per acre to 1900-5000kg during the last harvest season in April 2015... Read More

Farmers have often been frustrated by post-harvest losses they encounter due to poor post-harvest handling processes, especially storage. But following the E-warehouse programme intervention in Meru County, Martha Gatura is no longer worried about the vermin that often attacked her grains. Martha walks around her Dolichos beans (Njahi) farm, carefully picking them and putting them in the shawl wrapped around her waist. She is going to prepare lunch from these beans. From her one and a half acre njahi farm, she has enough for food and for sale... Read More

Cassava farming improves the living standards of farmers in Zanzibar

Bi Kazija Hamis, a 41 year old single mother of 4, lives in Kiombamvua District in Unguja and is a member of Kiombamvua Commercial Village (CV) in Zanzibar. “Before the introduction of the cassava project by Farm Concern International, I used to grow cassava on a small plot of half an acre mainly as food crop and not commercially. I would harvest 7-10 bags of fresh cassava from the 0.5 acre farm and sell at TSH 12,000 (USD 6) per 25kg,” said Bi Kazija... Read More

Rising from war-torn Ashes; Cooperative in Somalia revives after 22 years with focus on markets

Qabri-bahar Cooperative collapsed due to war and 300 households who had invested in the cooperative lost all their investments. Now 22 years later, the cooperative has not only adopted commercialization and market access but has also invested in a sugar processing plant factory. Qabri-bahar Cooperative has a market-led production informed by FCI Value Chain Analysis for staples and horticulture targeting domestic markets... Read More

Farmers in Mbeere reaping the benefits of PAMA project, an FCI intervention programme

During the marketing season FCI focused on creating marketing linkages for the farmers in Mbeere region. Farmers have been connected to export, fresh produce and processing markets. Coordinated marketing has helped farmers to timely avail their produce to the market.A farmer from Gatitu Commercial Producing Group (CPG) who sold 4.67 tons of Apple and Tommy mangoes to Sunny processors said, “For the first time in history my mangoes have not rot in the shamba... Read More