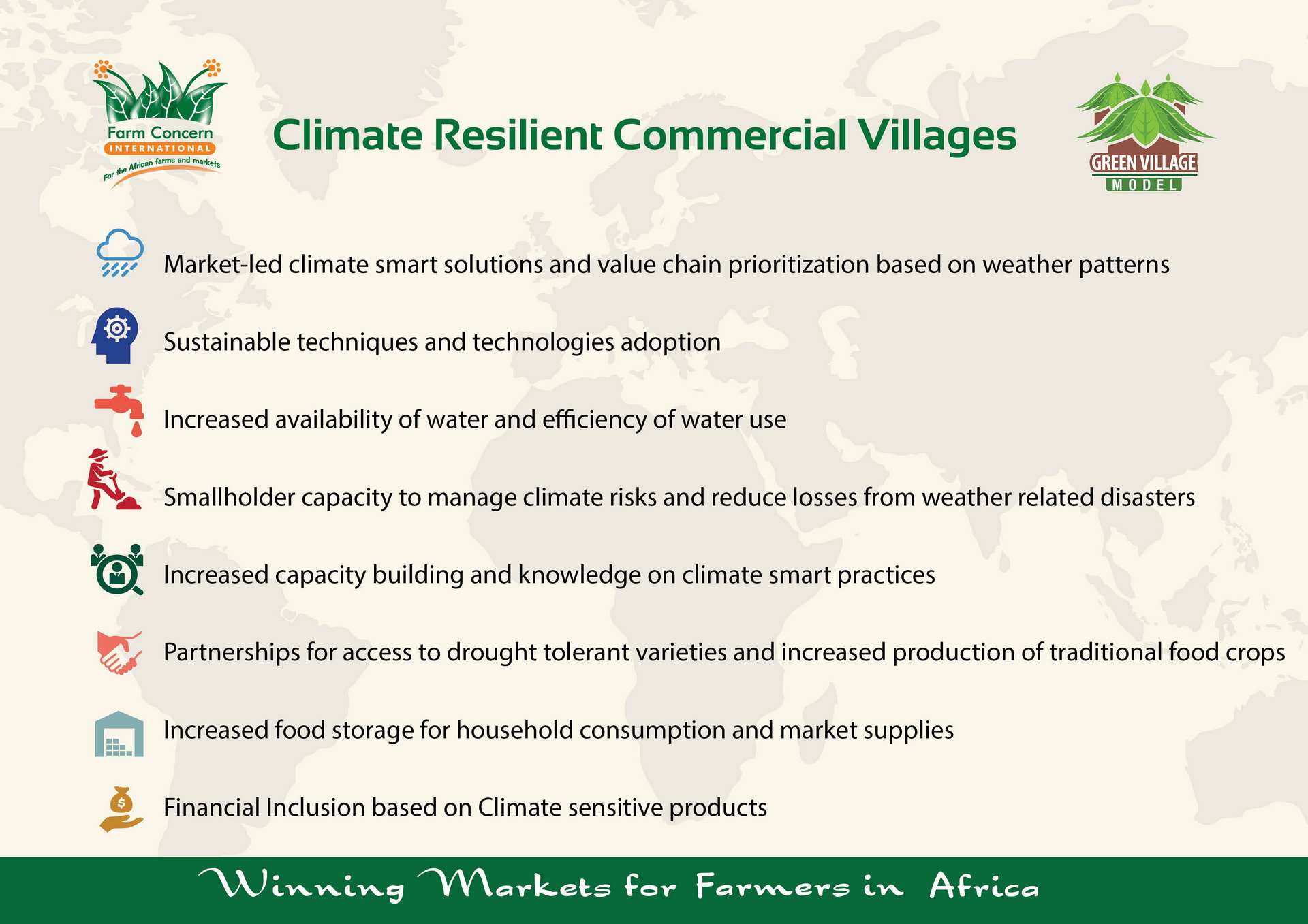 Cognizant of the adverse effects of climate change to the environment and people, FCI works with the Ministry of Agriculture, National Agriculture and Livestock Research Organizations and the Meteorological Departments across the countries to share information on weather, appropriate planting seasons and improved seed varieties with the commercial villages. This critical information helps farmers to plan ahead and make informed choices for example; when prolonged drought is expected in Arid and Semi-Arid lands, the agro pastoralists make choices using the weather information on when to sell their animals and when to re-stock.

Africa agriculture has been hit hard by climate change which has emerged as a major challenge to a continent heavily reliant on agriculture to feed the 1.2 Billion people. Farm Concern International, FCI works in 20,000 villages and has consolidated commercialization data that shows the impact of highly unpredictable and erratic weather system adds extra burden to food & trade system at an alarming rate. Increased and prolonged drought, frequent flooding, emergence of new diseases and pests has provided base for FCI Commercial Village Model development of innovations mitigate the threats posed by climate change. High levels of inflation caused by climate change impact continue to make food inaccessible to bottom of the pyramid thereby creating food crisis and increasing levels of malnutrition. The Green Village Approach designed by FCI is geared toward creating resilience and mitigate on effects of climate change through development of innovations, commercialization planning and technologies disseminations for effective natural resources utilization, environmental conservation and enhanced adaptation to climate change variabilities by millions of smallholder farmers in Africa. Through this approach, FCI aims at improving productivity, maintain productivity of superior varieties & breeds as well as sustain trade partnerships through restoration, conservation and effective management of bio-diversityâ€™s for ecological functions at the Commercial Village level. The Green Village Approach builds climate change coping mechanisms through utilization of green innovations that results to increased diversification of sources of incomes, increased food security and nutritional stability at the village level.

After a value chain analysis; green gram among other commodities recording high wholesale demand were prioritized and buyer partnerships established, resulting in Commercial Villages adopting green gram improved varieties for commercialization. Additional to her livestock, Ms. Dida was growing maize and beans on half an acre with an earning of Kshs. 6300 from maize and Kshs. 7,500 from beans totaling to Kshs. 13,800 (USD 138) per season. From the same piece of Â½ acre, Hakule earned Kshs. 19,250 (USD 193) from green grams and saved Kshs 900 (USD 9.06) on transport since the Commercial Village supplied a wholesaler who picks at farmgate...Read More

Cassava for food security and resilience in Arid and Semi-Arid regions: Smallholder farmer increases acreage under drought resistant cassava by 100%

Mr. Ndaka is an outstanding farmer who believes in doing things big and right. The 63 year old farmer is a go getter who stops at nothing but profits accrued from farm products. When Cassava Commercialization & Village Processing Initiative was introduced in Kathonzweni Sub County, Mr. Ndaka took the initiative positively and put 2 acres of land under cassava hoping to get good returns. His successful sale of cassava, gave him the confidence to double his land under production of cassava where he has now 4 acres of land and he is planning on the next sales along with his neighbors in Mbuvo Commercial Village, which was established in 2010...Read More

The Semi- Arid Region Commercialization Programme implemented by World Vision Kenya and Farm Concern International with support from World Vision Australia enabled smallholder farmers in Kalawa and Mwala to post impressive sales in the month of June. In Kalawa, sales worth Ksh 921,970 were realized in while in Mwala, farmers managed to make sales worth 319,450. Farmers made the sales primarily from the sale of green grams, tomatoes and cowpeas in Kalawa and tomatoes, watermelons and onions in Mwala...Read More