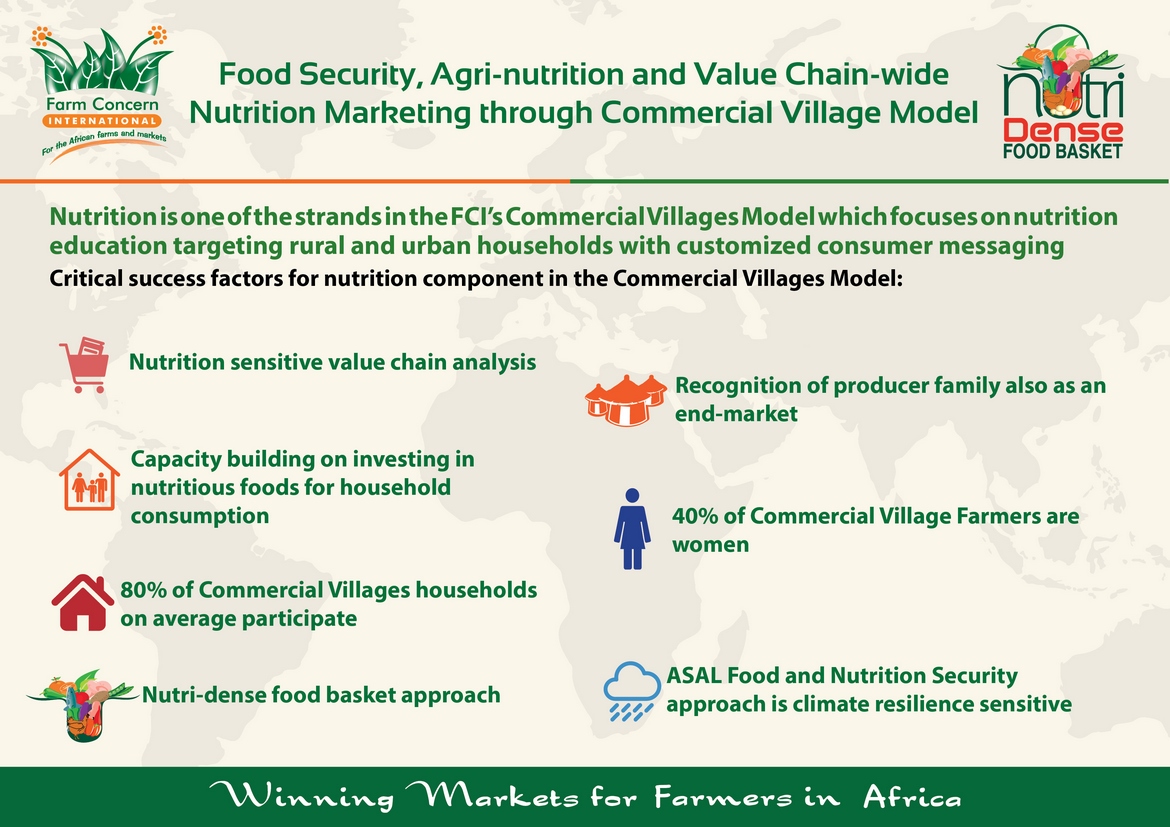 Food & Nutrition Security in the Commercial Villages Model is a deliberate step in FCI’s work. 40% of farmers are women whose families are also an end market for food systems. The need for nutrition education targeting rural and urban households with customized consumer messages allows the houses to invest in nutritious foods for consumption. Farm Concern International’s Commercial Village Model approach  which incorporates  nutrition  offers a counter measure to safeguard both income and food security.This approach is called Commercial Village led season planning which ensures commercialization does not choke food and nutrition security.

Micronutrient deficiency also known as hidden hunger is a major public health problem in developing countries caused by lack of essential vitamins and minerals in the diet. Often, signs of this form of malnutrition are ‘hidden’, as individuals may ‘look alright’ but suffer extremely negative impacts on health and well-being.

Globally, an estimated two billion or about one among three people suffer from this condition. As home to some of the most nutritionally insecure people in the world, Africa is faced with a high prevalence of hidden hunger. Micronutrient deficiency affects a third of Sub-Saharan Africa’s people. It can and do impair intellectual development, compromise immune systems and provokes birth defects. Ensuring the general population is well versed with knowledge on micronutrient deficiency goes a long way in helping address this problem.

Residents of Mbuvo Commercial Village in Eastern Kenya have improved food security and increased income under the Kenya Cassava Commercialization and Processing Programme supported by Alliance for a Green Revolution in Africa and implemented by Farm Concern International. “We harvested a total of 16,016 metric tons which was consumed domestically while the excess was chipped and dried for storing,” remarked Mr. Masyuki- the Commercial Village chairman...  Read More

Over the years, the world population has been growing at an unprecedented high rate. The United Nations had projected that there would be an estimated 9 billion people in the face of the earth by the year 2014. World Population Review observes that "Africa countries are all growing fast... because there is large number of women who have no access to planning their families.” In most countries in the continent, the population growth is in excess of 2% every year...  Read More

Mr. Ndaka is an outstanding farmer who believes in doing things big and right. The 63 year old farmer is a go getter who stops at nothing but profits accrued from farm products. When Cassava Commercialization & Village Processing Initiative was introduced in Kathonzweni Sub County, Mr. Ndaka took the initiative positively and put 2 acres of land under cassava hoping to get good returns...  Read More

One of the goals of KHCP project implemented in Lake Victoria Hub in Kisumu County, Kenya, was to promote product diversification by promoting high value crops suitable for smallholder production, commercialization and value-addition such as Traditional African Vegetables (TAVs). Research shows that people who regularly consume vegetables in their diet have chances of a healthier and longer life... Read More

Farm Concern International (FCI) successfully implemented a Cassava Village Processing Project (CVPP) in three years in Kenya and Tanzania. This project involved 54,000 farmers in 214 commercial villages and increased yields per acre to 9MT up from 5MT. The project also enabled village based seed multipliers to produce a total of 40,013,000 improved cassava cuttings. In the process, smallholder farmers in the Commercial Villages (CVs) gained revenues of up to USD 26,622,623.2 (KES 2,644,600,000) from cassava-related trade...  Read More

FCI has partnered with several actors to implement a three year, Expanded-Cassava Processing Project - (E-CVPP), in Kenya and Tanzania, with funding from the Alliance for Green Revolution-(AGRA). This is geared towards promoting food security and economic empowerment among the low income rural farmers. E-CVPP is a scale up project, building on the success of a Cassava Village Processing Project - (CVPP), implemented in three years in Kenya and Tanzania. This (CVPP) project involved 54,000 farmers and 214 commercial villages)...  Read More