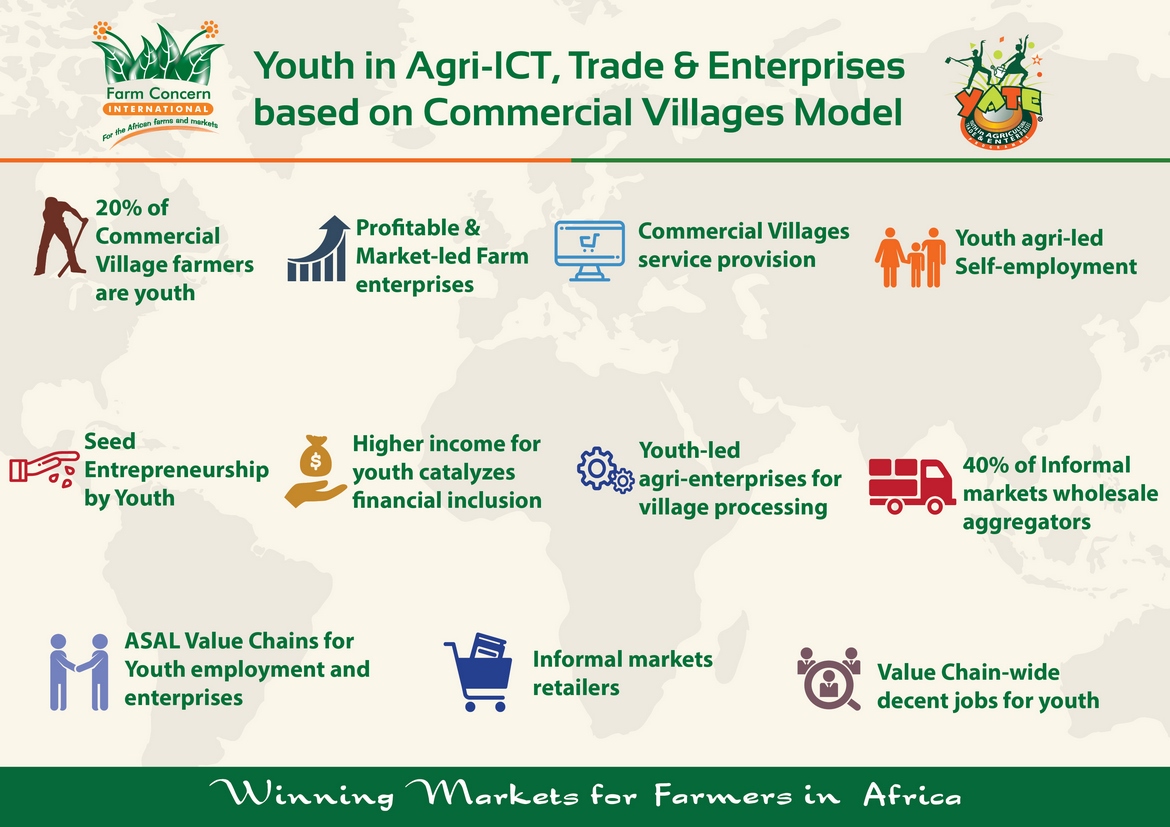 In Africa, youth form the majority constituting more than 70% of the total population although 60% of these youth are unemployed. Appreciating the fact that rural youth attached to agricultural especially in production phase are more disadvantaged compared to those in non-farm activities, FCIâ€™s youth in agricultural trade and enterprise approach seeks to build and expand young peopleâ€™s interest in agricultural enterprises at different nodes along the value chain as a worthwhile alternative source of employment and income. The approach focuses on identifying factors inhibiting youth participation in agriculture and in turn establishes preferred youth owned agricultural enterprises along the value chain such as value addition enterprises, business support services provision as well as input supply.

Making agriculture modern, it has considerable potential for job and wealth creation especially for youth who could have otherwise migrated to already crowded cities. This requires strategies to make agriculture an attractive enough option for youth to engage in, including moving away from subsistence agriculture, and introducing commercialization and productivity improvements through technological innovations and infrastructure support. Through the YOUTH in Agri-ICT, Trade & Enterprises, FCI has developed customized training manuals and modules to train the youth on business skills. Through the commercial village model, the YATE approach facilitates youth empowerment and commercialization through creation of youth friendly market linkages, strategic partnerships, business support services providers, agri-technology as well as customized savings and investments facilities for the youth. Through YOUTH in Agri-ICT, Trade & Enterprises, FCI has worked with over 5.1 million youth across 8 countries in Africa.Â

For many seasons Mr. Yate tried farming to compliment income from his electrical wiring job that he had been doing since he completed college. He planted maize and beans, the only crops he knew and understood as the best and the suitable for Marsabit and he also found his parents farming as he grew up, for many season but what he got out of it was really discouraging since Marsabit weather is unpredictable and most of the time received very little rainfall...Â Read More

Mr. Halakhe Wako a standard eight leaver and member of Dirib Gombo Commercial village developed passion for green grams farming after attending commercialization campaigns by Farm Concern International under the Agro-pastoralist Commercialization and Markets Programme in Northern Kenya. Halakhe completed his primary school education in 2013 and did not join secondary school due to lack of fees. Halakhe used to look after his familyâ€™s livestock on completing primary school level...Â Read More

Thirty two percent of Kenyaâ€™s population consists of youth aged 25-54 but most of them are unemployed. Those from rural areas often flock to towns such as Nairobi City to look for casual jobs. Due to job scarcity some join crime. However, youths in Kieni County are prospering through farming, under the Domestic Markets Regional Programme implemented by Farm Concern International with support from Bill and Melinda Gates Foundation. At a recent interview, Chief Lydiah Wachira applauded FCIâ€™s efforts to commercialize onion farming in Kieni...Â Read More

According to World Bank stats, South Africa unemployment rate is currently at 52%. Farm Concern International aims to lower this percentage by turning around the smallholderâ€™s economic empowerment in South Africa. To actualize this, FCI is preparing to start operations in South Africa through the Rural Commercialization and Market Development in South Africa, (RuCoMaDeS)...Â Read More